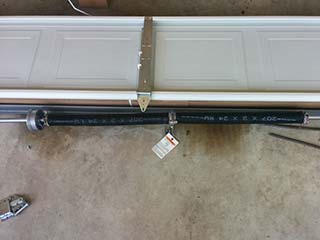 Whether you have a 20-year-old residential garage door or one which has just been installed, it will most likely have a torsion spring system. The system features one or two springs mounted over a shaft above the door. When installed, they are loaded with a specific amount of power matching the weight of the unit. The technique used for this is winding. During door opening, this power is released and applied to the drums at the end of the shaft and then to the lift cables. This is how the spring system actually lifts the door while the opener replaces only the effort which you would make to open the unit manually. During closing, the springs wind to get loaded with energy once again.

These are more commonly used in commercial overhead doors, but they are found in a considerable number of residential units too. These springs come in a set of two and are installed above the horizontal tracks. The back end of each one is secured in place with a bolt while the front one is connected to a system of two pulleys, which have the lift cables running over them. During installation, the springs are stretched and stay that way while the door is closed to counterbalance it. During opening, they contract and release the energy which they have been holding. It’s applied to the pulleys and lift cables to facilitate the lifting of the door. You should know that there is a safety cable running through each extension spring to hold the remaining pieces in place when it breaks.

Have any questions? We are here to help! Leave your contact information down below and our team will get back to you as soon as possible.

With our team at your service, your satisfaction is always guaranteed. You can count on our professionals for outstanding quality and perfect results!

* $29 service call - deducted from the service

Please fill in your details below:

The appointment was scheduled successfully!

Thank you for choosing our company! Feel free to browse our website for more information in the meantime. Our team at Garage Door Repair Livingston is at your service any time!